Owls all the way

You're very clever, but it's owls all the way down! An ongoing grad school blog. 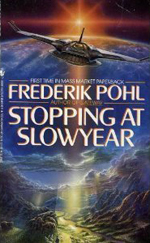 Stopping at Slowyear a science fictional “bad real estate deal.”* The titular planet has years-long seasons; summer and winter are brutal. The population relocates to cramped underground quarters and must rebuild all surface structures every spring. Worse, there’s a native disease that leads to high child mortality rates and premature death.

Slowyear is not, at first glance, that much worse a deal than other options for the crew of the Nordvik. The planets visited by the tramp freighter grow progressively less appealing, even as shipboard life becomes more unbearable; physically and socially constrictive living conditions are standard on the ship. I rather like that setup, which draws parallels between the situation on the freighter and the planet. I like the assertions that it’s tough to live in environments—natural or artificial—where one’s species did not evolve, and that public health issues matter, even as they become transparent to the public in question. Before it takes a gothic turn at the end,† the story deals, in part, with the nuts-and-bolts implications of the scenario. That’s one of the raison d’etres of science fiction, hard or soft, in various media.‡

In some ways, Slowyear did its job. In others…this is a case where I like the book in my head. I’m not certain how much I like it, but there’s something worth mulling over. The book on the page, however, goes in different directions, and gender issues end up derailing interesting aspects, rather than being themselves interesting.

In Slowyear, unhappy marriage is the norm and infidelity endemic. Monogamy is a miserable trap for men; they cheat to escape the drudgery of marriage (which, by the end, is explicitly compared to a literal death sentence). Women are in competition with one another. Though I’ll grant Pohl some points for female point of view characters, the sexual politics are pretty toxic.

To a certain extent, that’s the point. The societies of Slowyear and the tramp freighter are deeply dysfunctional, to say the least. But it feels like a missed opportunity. Pohl extrapolated other social factors, why not this one? Other aspects of Slowyear’s society were adapted to the environment and psychology of the population.§ An economy, medical system, and judiciary adapted for sociopaths…but nobody ever heard of polyamory?**

More innovative than the toxicity of the sexual politics was the toxicity of a high childhood mortality rate: it essentially created a population of sociopaths.†† The thing that made Slowyear a bad real estate deal wasn’t so much the climate as the neighbors. It’s certainly an interesting thought, and I’m torn about how much I buy it.

High infant and childhood mortality rates are, thankfully, somewhat alien to my personal experience, and I expect to live more than half a century. But a great many societies, historical and contemporary, do not share those comparatively cushy expectations. Pohl would perhaps argue that all those billions of people were (are) sociopaths. There’s a fairly obvious negative critique of such a position, which would make use of words like “privilege” and get less complimentary from there. But I do find the idea of examining societal response to grief and mortality an interesting foundation for a SF scenario. I wish that that particular book in my head had appeared on the page, and more than 150 of them.

* The type of story (I think Cherryh coined the term) includes planets like Finisterre, where the telepathic fauna threaten the sanity of human colonists, and Pern, where Thread periodically fall from the sky and burrow through anything other than solid rock. (Rule of thumb: if the logical response to the environment is building a society around individuals telepathically bonded to dangerous native critters, you got the short end of the stick.)

† I won’t go so far as to say Pohl wasn’t playing fair with point of view, but it didn’t work for me. A short story can be build up for a twist, but it’s harder to pull off at greater length.

‡ The Battlestar Galactica reboot got the “gritty” label because everybody said (and engaged in) “fracking,” but it genuinely deserved gritty kudos for some early episodes where the driving concerns were logistical, little things like where to find fuel and water. (Magical cylon babies, shoddy motivation, and a Turkey City resolution…not so much gritty or kudos-worthy.)

§ The freighter crew was a subjective couple of decades removed from Earth society (rather than generations), so it’s more understandable that they’d maintain old (e.g. dominant at the time of writing) social patterns. Given that short time frame, and the 150 page length, I wouldn’t expect something along the lines of, say, Cherryh’s matriarchal Merchanter society.

** Though commercial SF garners (often deserved) criticism as a less-than-welcoming bastion of straight white males (authors, characters, and readers), as mainstream an author of Heinlein played with matrimony and other social conventions. Pohl tossed quite a bit into a short work, and I wish he’d tossed in some more innovative cultural practices.

†† Yes, “sociopath” is a fuzzy and problematic term, but I think it’s perfectly cromulent shorthand for discussing fictional societies.